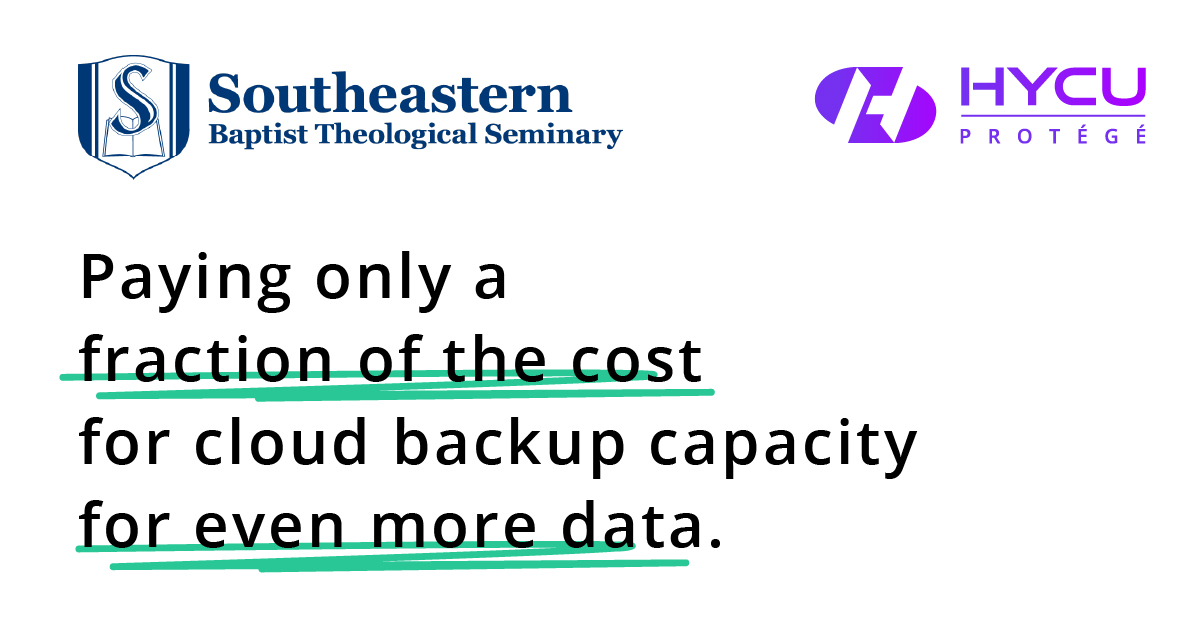 Business Challenge
To serve its students and faculty both on-campus and online, Southeastern Baptist Theological Seminary has a robust IT infrastructure that includes terabytes of data it needs to protect. In an effort to reduce licensing costs and simplify management, Director of IT Wayne Jenks decided in 2016 to move away from VMware and implement a Nutanix hyperconverged infrastructure (HCI) using AHV. In addition to on-premises backups, some VMs were backed up to cloud storage hosted by another provider.

A ransomware attack in August of 2019 changed the picture. While he was able to avert disaster using Nutanix snapshots and other backups, Jenks recognized the need to expand his off-campus cloud backups to improve disaster recovery. Unfortunately, the increased volume of data exceeded the vendor’s contracted storage limit of 3TB, triggering steep overage charges.

“The overages nearly doubled our annual costs with the cloud backup vendor. I wondered whether there was a way we could be paying less,” Jenks says, noting that the vendor also did not support Nutanix AHV, providing further incentive to find a better solution.

At a Nutanix conference, Jenks was introduced to HYCU by a Nutanix representative.
HYCU’s tight integration with Nutanix and its seamless support for Google Cloud Platform (GCP) as a backup target ticked all the boxes. With help from Google Cloud partner, Burwood Group, worked to deploy the right solution. Burwood helped onboard SEBTS onto Google Cloud Platform (GCP) along with assisting in provisioning of multiple cloud resources that enabled successful data transfers to HYCU. The process was straightforward, the interface is really smooth, and as a result, it was very easy to get HYCU quickly setup within GCP. As Doug Burton, Executive Director, Burwood Group notes, “The HYCU team is very motivated and helpful. Their engineers were easy to work with and knowledgeable about how to get the product deployed.”

“I could see that backing up to GCP with HYCU would be significantly less expensive than what we were paying our existing cloud backup vendor,” Jenks says, noting that he went forward with HYCU to back up his entire Nutanix environment of approximately 12TB across 30 VMs.

While Jenks initially adopted HYCU to reduce costs, he soon discovered that was just the beginning of its value. “If I had known sooner about some of HYCU’s other features, like the ability to restore an entire VM or application-specific tasks, I would have switched sooner,” he says.

Moving to GCP with HYCU for cloud backups has generated tremendous savings for Southeastern Baptist Theological Seminary. “We are now paying a fraction of the cost for cloud backup capacity for even more data,” Jenks says, noting that he can store 10TB on GCP for about $100 per month, versus $1,400 per month for just 6TB with his previous cloud backup vendor due to overage charges.

HYCU simplifies the process of scaling to accommodate growth. “We have more than quadrupled our required resources in the past year,” the senior infrastructure engineer notes. “With HYCU, the ability to add new nodes quickly, easily and costeffectively has been amazing.”

Jenks appreciates the flexibility of HYCU’s customizable policies. “I can have a different retention policy for every single VM if I need to,” he explains, “As long as there is physical space available locally or in the cloud, I can have nearly an infinite number of restore points. That’s not something I could have managed with our former backup solution.”

Having centralized management of both on-premises and cloud backup targets also adds flexibility. “Now I have two different locations I can back up to and they don’t even have to be the same backup sets to those locations,” he says, noting that he can easily add physical storage devices or spin up new cloud targets as needed.

Jenks has special praise for HYCU support, including his HYCU support engineer. “Of all the support engineers I have ever encountered, he is the most knowledgeable,” Jenks says. “He’s been willing to run down any issue and not leave me hanging. I have been thoroughly impressed.”

To learn how HYCU can help your Nutanix or Google Cloud Platform backup strategy, visit www.hycu.com or email info@hycu.com.